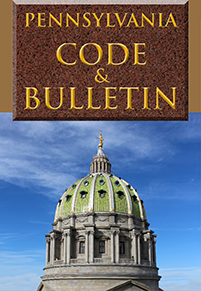 No statutes or acts will be found at this website.

About the Pennsylvania Code & Bulletin

• No statutes or acts will be found at this website.

1.  What is the Pennsylvania Bulletin?


The Pennsylvania Bulletin is the official gazette of the Commonwealth of Pennsylvania. The publication serves several purposes. It is the temporary supplement to the Pennsylvania Code, which is the official codification of rule, regulations and other statutorily authorized documents. The Governor publishes executive orders, proclamations, and the like. The General Assembly publishes recent actions, committee designations and other notices. The Supreme Court and Rules Committees publish proposed and final amendments to their rules. Courts of common pleas publish orders. Executive and independent agencies publish notices in the Pennsylvania Bulletin covering many topics, including meetings, grants and permits. A cumulative subject matter index is published quarterly.

2.  What is the Pennsylvania Code?

Inquiries should be directed to:

5.  What is the difference between a rule or regulation (on one hand) and a statute or law or act (on the other hand)?

The General Assembly enacts statutes by passing bills in the Senate and House of Representatives and sending them to the Governor for approval. Some statutes give an agency in the executive branch the authority to adopt rules to further carry out the statute. Armed with this authority, the executive branch agency adopts rules by following a rulemaking procedure.

6.  Generally, how are rules adopted, amended or repealed?

- The statutory authority for the proposed action.

- The full text of the change.

- A fiscal note required by law.

- Background for the action.

The agency then allows sufficient time for public comment and reviews required by statute before taking final action. An adopted proposal must be published in the Pennsylvania Bulletin before it can take effect. If an agency wishes to adopt changes to the Notice of Proposed Rulemaking to enlarge the scope, it must re-propose.

7.  Does the General Assembly have a role in rulemaking procedure?

Yes. Standing committees of the Senate and the House of Representatives are assigned jurisdiction over rulemaking agencies, by subject matter, at the start of each regular session of the General Assembly. For example, if the Department of Transportation wants to adopt a rule, the House and Senate Transportation Committees review it.

Infrequently, standing committees may disapprove a rule which an agency wishes to adopt. In these rare cases, a standing committee may report a Joint Resolution, the effect of which, if adopted, is to prevent the agency from proceeding in its attempt to adopt the rule.

8.  In a court of law, will a properly adopted rule have the same effect as a duly enacted statute?

9.  May a citizen ask for a change in an agency rule?

Yes. Under 1 Pa.Code Section 35.18 a citizen may submit a petition asking an agency to amend, delete or change its rules.